I’m still obsessed with kids rooms. I’m not sure what I’ll do when mine won’t let me interfere anymore. They’re already deeply involved in their room schemes (see my post about kids who decorate) but I still get to direct a lot of it and contribute ideas.

I’m getting ready for our move to the new house in a month or so. I’ve been gathering lots of ideas for various rooms on Pinterest and these blew my mind. Even though the kids have their own rooms at last, I still can’t get enough of brilliant bunk bed ideas.

These bunks are so inspiring in three very unique ways. Calm, vintage-style room with built-in bunks via The Telegraph And here’s our old house in LA where the kids shared their bunk under the tree. This time last year, when we moved to London and rented out our house, my daughter helped to paint over the tree. Gone forever! You can’t get too sentimental about interiors though, can you? How do you feel about letting your kids’ make their own decorating choices? Do you let them pick paint colours for their room? Their bedding? Or are you – like me – afraid they’ll pick Moshi Monsters duvet covers and glossy orange walls?

It’s a tough one isn’t it because, for me at least, my home is really important and I want it to look great. But I also want to raise independent-thinking, creative children.

Mary Randolph Carter, whose amazing interiors book A Perfectly Kept House is the Sign of a Misspent Life is a must-read for anyone who cares about interiors but has kids and a busy life. In it she features the home of Pamela Bell, one of the founders of Kate Spade. Her home is the perfect blend of stylish, eclectic, cool, elegant and kid-friendly. Rather than upholster her John Derian sofa and chairs, she let her kids colour all over the muslin. Some people hate it and think it’s a waste and a bit spoiled to let kids “destroy” an expensive piece of furniture. I think it’s fabulous regardless of the price. If you’ve got the money what does it matter? It’s all relative isn’t it?

But I was brought up by a mum who let us do anything to our rooms and always let me decorate the Christmas tree. (Pink ribbons on every branch? Sure, why not!) I once drew a large pair of big-lashed eyes on my bedroom wall (not sure why exactly). I dipped my palms in paint and covered my wardrobe doors in handprints (again…why?). I plastered my walls in hundreds of fashion magazine tears as a teen and experimented with all sorts of ideas over the years. If nothing else, it led to me being the creative and resourceful person I am today.

What do you think? How much input should kids have in their home’s design?

For some creative kids’ space ideas have a look at my kid space Pinterest board.

If you’ve ever sat on a sofa or chair upholstered in burlap (or hessian if you’re in the UK) you’ll know they are horribly scratchy and uncomfortable. My cousin’s got a hessian/burlap wing back chair that I love to look at but it’s never my first choice to sit on when I’m over there for dinner.

Is that going to stop me from covering a loveseat in the stuff? Probably not. I just love the way it looks – it’s an interesting neutral that works with any scheme. Although, I might go for a rough burlap-look linen so as not to torture my whole family.

I found an adorable little two-seater sofa on the street a couple of weeks ago and we happened to have hired a car for the day to look at houses. It was actually a mini-van (or people-carrier as they say here). Perfect! My husband’s used to me bringing home junk but even I was a bit worried about this one because it’s got some really tacky fabric on it. Faded red with Italian words on it in a curly font. Really awful. I can’t imagine what the previous owner was thinking.

But we don’t have ANY furniture. Remember a year ago when we sold everything and moved to London?? Yeah, still don’t have anything except for my street finds and charity shop trips.

Anyway it’s got a nice shape to it and it’s comfortable. I also found two chairs on that same trip. Thank God for minivans! (I’d never own one, but damn they’re useful). My kids were crammed in the back with a load of dirty old chairs. Nice. They’re probably going to grow up wanting everything shiny and new and it will be all my fault!

Here’s what I’m going for:

(Minus the ruffled pillow and candelabra) But since I’ll be upholstering it myself, here’s what I’ll probably end up with: Plonked down next to this beauty below it’s going to look fabulous! Of course I don’t actually own this Anthropologie chair, but it’s bloody amazing. Next time I’ve got a spare £2000 I know what to do with it.

Maggie O’Neill is an artist based in the US in Washington D.C. and her paintings are pretty wild. She just did a feature on kids’ rooms on her website/blog and used one of my pictures of mykids’ room with the birdhouses/tree mural.In turn I had a look at her site and she’s got some interesting stuff. Colourful, vibrant, with a painterly technique that I love, some of her landscapes are like a modern day mash up of Pissaro, Seurat and Monet. If the Impressionists and the Expressionists got together, you’d get something close to Maggie’s paintings.

But what I really love – from an interiors point of view especially – is the work she did in Marrakesh for the boutique hotel, Peacock Pavilions. She and a team of decorative painters flew there for a week to add some magic to the walls, ceilings, and other surfaces of the hotel.

The results are truly spectacular. Between the beautiful painting and the very stylish and eclectic interior design I think it’s pretty incredible. I love that each room is different, yet they all work together. Not your typical hotel. To quote Liz Lemon: “I want to go to there”. 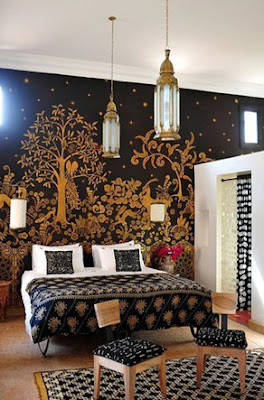 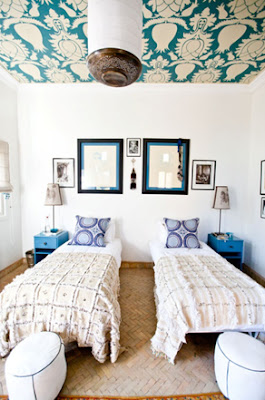 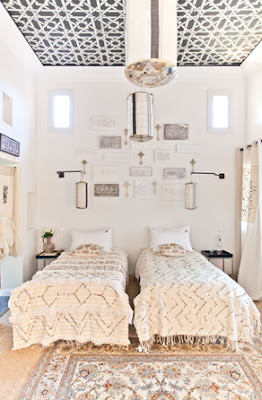 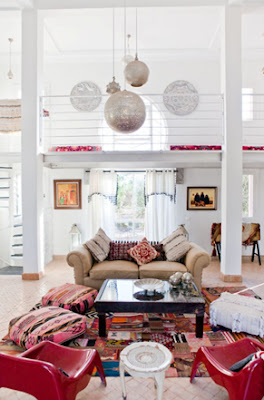 Here’s Maggie hard at work. What a great thing to be a successful, working fine artist. 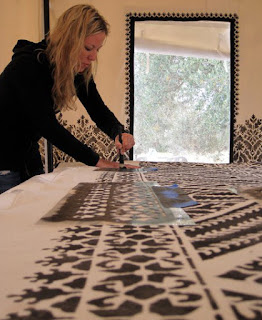 And here are a couple of my favourites from her fashion series: 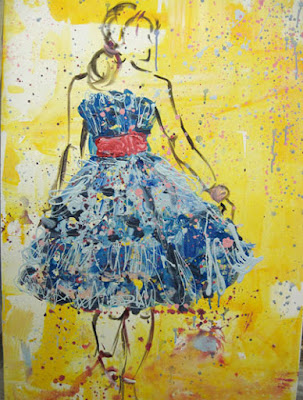 House Hunting Should Be Fun…

…But when you’re looking to rent a house in London when the Olympics are about to happen, it sucks! Since we moved to London a year ago, we’ve been living in a rented flat that’s too small, has no garden for Gracie the Frenchie, and is unstylish in that beige carpet, wacky kitchen tile kind of way that only a rental can be. Now it’s time to move and there seems to be nothing out there that’s in our price range, in the right area, meets my very finnicky standards in terms of style, and somebody didn’t already snag. (Yeah I mean YOU, perfect house I put an offer on but someone put in a better one. I wanted you! You were amazing!) Aaaagghhh! This should be fun, but it’s not. It’s stressful and horrible and annoying. Pic on the left. Clean and calm but with a bit of pattern. Love this black floral chair. Yellow floor and hide-covered chair. Simple and clean but a bit eccentric. via A Pink Dream

Collage wall. I had one at Uni many moons ago. I’m too old for it now but I can live vicariously through my pre-teen. Climbing wall up to a loft bed. Definitely doing something like this. For my other new house ideas, have a peek at my Pinterest board.

A bit too snap happy

I may have taken it too far when I snapped a pic of the lovely bathrooms at Moro in Exmouth Market, London. I went for an amazing meal with one of my oldest and dearest friends, the fab photographer Yolanda Chiaramello. As I was heading for the loo she said, “you’re going to want to take you’re camera”. She was right. Yummy minty scalloped tile with dark grout on the walls and black floral tile on the floor. Who cares that I looked like a weirdo taking a pic of myself in the mirror.

Unbelievable food, by the way.