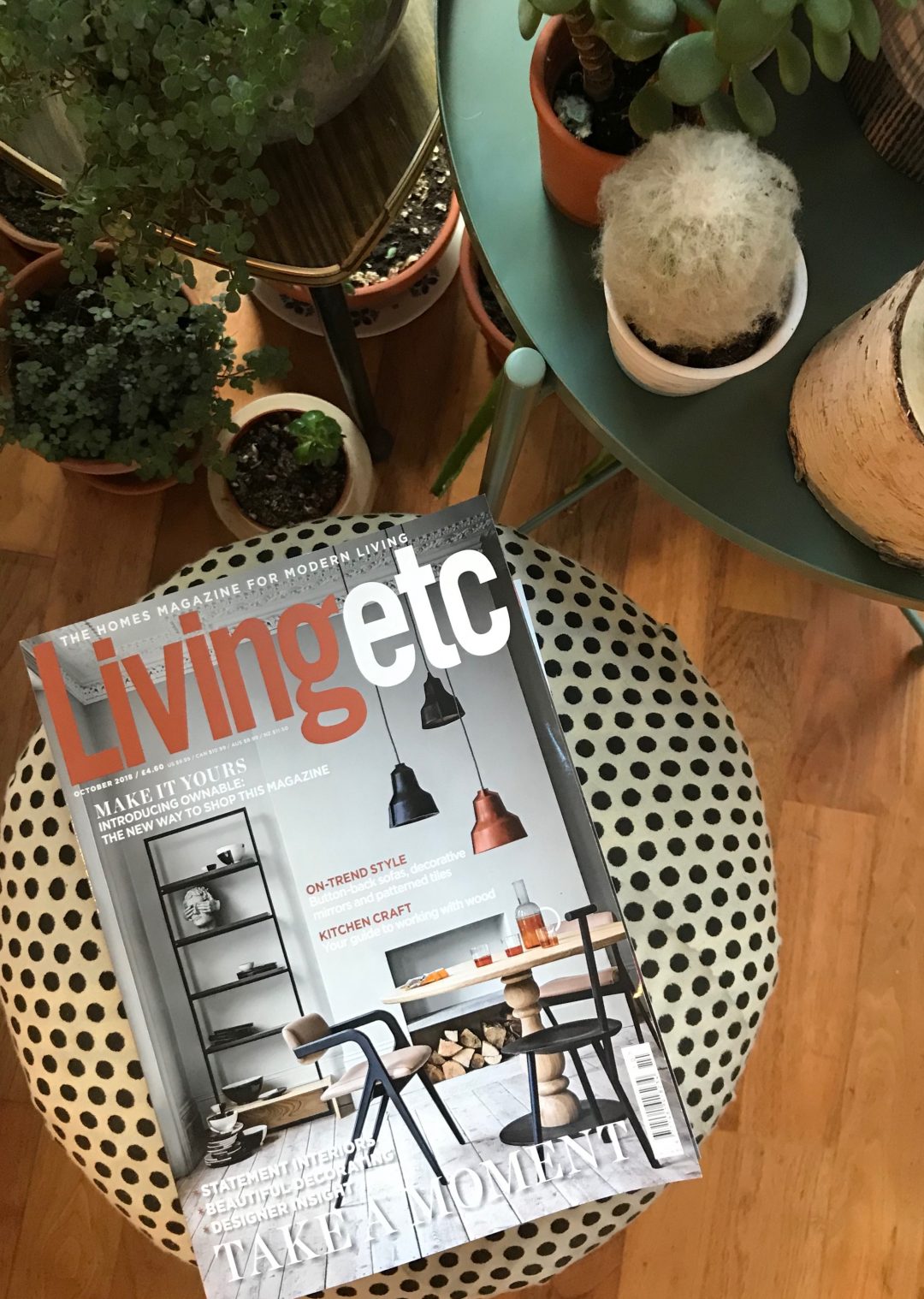 I spend a lot of time on Instagram these days, favouring its instant gratification over the more laborious task of writing a blog post. But every now and then I want to say more and I know most people just scroll at lightning speed, rarely reading what people say on Instagram. If you’re here reading this, then I know you’re a dedicated friend or follower!

I have an exciting event coming up in October with Living Etc magazine and Anthropologie, two interiors  brands that have been in my life for many years in one way or another. You probably already know my connection with Anthropologie, but I wanted to tell you why this means so much to me. This has nothing to do with self-promotion. This is about dreaming big and knowing that sometimes when things seem like they’re not going ‘to plan’, there is a bigger and better plan you don’t yet know about.

For years I drooled over Living Etc magazine, especially when I was living in the US, mainly because it had a different aesthetic to American interiors magazines. It felt more quirky and modern and British, a taste of home for this expat. When we moved back from LA to London in May 2011 I set my sights on working for the magazine in some capacity. I even made a vision board to represent what I wanted to achieve and one of the things on it was a group photo of all the staff that I had cut out of the magazine – the idea being that I wanted to picture myself on their team! What a dork!

I was starting over as a stylist in the UK because I wasn’t established enough in the US to be a big name and even though I had a decent portfolio, it didn’t seem to matter. But somehow I managed to get an interview with the then Style Director of Living Etc the week I arrived.  She was lovely, really positive and seemed to like my portfolio, even letting me tag along on a shoot to see how things worked. She said maybe they could get me on board as a freelancer to style one of the smaller shoots to begin with and see how it goes. I waited with baited breath but it never happened. I was so upset. Being the optimist that I am, I was sure something good would happen! A few months later I saw that there was a staff position available at the magazine – a very junior styling assistant, but I didn’t care. I had my heart set on working for that magazine so I applied for the job. I went through the interview process which culminated in planning a shoot on paper. I worked my arse off and really did the best that I knew how at that time (although I’d only been back in the country for a couple of weeks after living in America for 18 years and really didn’t know how to plan a shoot in London!) I think I didn’t a pretty good presentation. But I didn’t get the job. They went with someone else.

Imagine how that felt, not being able to get a job as a lowly styling assistant when I’d been styling my own shoots in LA. Granted, the style director said she thought I was overqualified, but still! I was gutted. I thought it could’ve been a foot in the door to an industry that seemed to have its doors tightly guarded. I went on to work on an interior design project for a wealthy property developer – a project that I wasn’t passionate about and therefore wasn’t very good at – and tried to figure out my next move. The next move ended up being the introduction to my now book publisher Ryland Peters & Small and my first book Modern Rustic, which is the next part of the story, perhaps for another post. 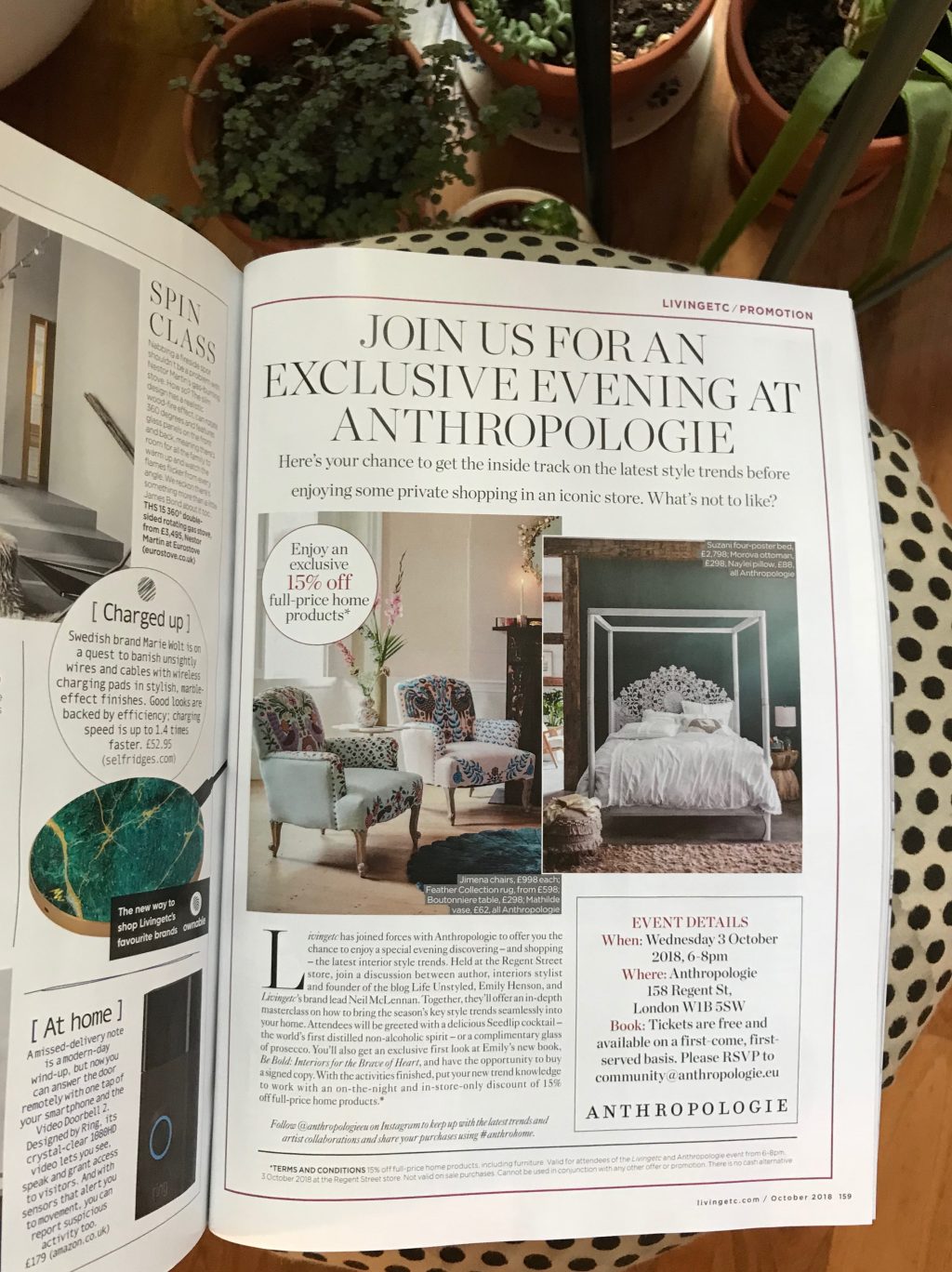 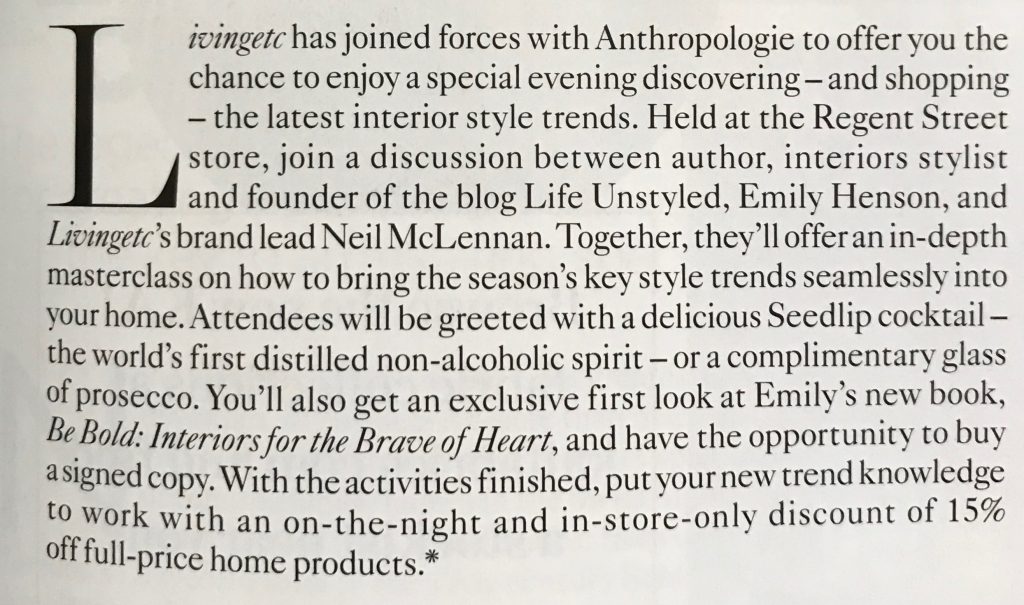 In two weeks I am co-hosting an event with Neil McLennan, Executive Editor of Living Etc, at Anthropologie’s flagship UK store, teaching a masterclass on trends for the season, and signing preview copies of my fourth book Be Bold (yes I’m doing another book, might’ve forgotten to mention!) If you had told me this seven years ago I wouldn’t have believed you. I know people say that, but really it’s true. It would have seemed an impossibility. Four interiors books, hosting an event with the magazine where I couldn’t even get a low level job, for a brand that I used to work for in the US as a lowly display artist when my kids were little. Un-freaking-believable.

My life is far from perfect, my career still has plenty of room for growth and I have so much more to offer creatively, but today I had a moment. I got a bit teary-eyed to be honest, much to the horror of my kids. I am proud that I didn’t give up, that I picked myself up over and over again after countless disappointments and perceived failures. I didn’t settle for jobs I wasn’t passionate about even though they were secure and I didn’t let my insecurities get the better of me. I don’t know what’s next, but I know I’m ready to start planning big things again. When I read the little blurb in the magazine that mentions my name, I was on the bus (swearing at myself for not having a car), surrounded by shopping bags of props for a shoot next week, hair disheveled, no make-up, and generally not feeling like much of a success at all.  But when I read it I couldn’t help but grin like a maniac and I forced myself to really feel it, to acknowledge what I’ve done and think about the journey that got me here.

Thanks for always being here, following along on this messy journey called life.

If you’re in London and you’re interested in the event, it is free but limited so RSVP now to community@anthropologie.eu. 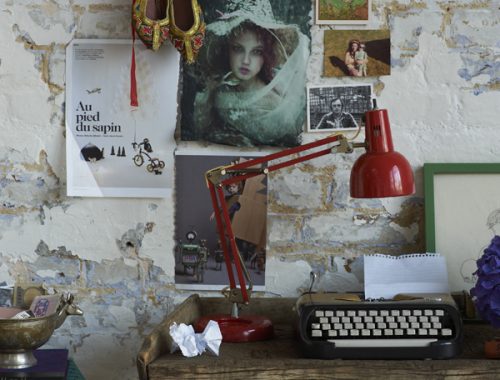