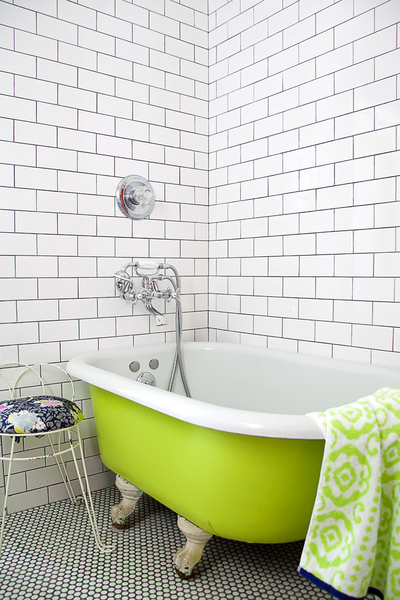 Behind The Scenes, Creativity Before Consumption, Interiors

A week ago the lovely ladies over at Design*Sponge featured my bathroom in their Before and After segment. They only included one before shot so I thought I’d show you a few more today so you can see just how awful it was.

We’ve lived in our house for five years and the bathroom was the last thing to be fixed up. Looking at these pictures, I don’t know how we lived with it for so long. It’s nasty. But it was the one room that needed a bit of cash thrown at it and some professional help instead of our usual DIY attempts. So we had to wait. Ugh. I’m breaking into a cold sweat looking at this one. So much mismatched junk. And nowhere to put anything except overstuffed baskets. Kitschy art on the walls was a nice try but, no.

With the help of said professional, my friend Josh, demolition began: Once Josh got the tile and tub in, I had him put up wainscoting all around the room. It’s dirt cheap, at about $20 per 4′ piece and it really adds character to an otherwise featureless space. Then I agonized over what shade of grey-lavender to use. And yes I know the silver toilet seat was too small, thank you very much. I bought an old sink at Habitat for Humanity ReStore for about $50. I wanted an old one with utilitarian faucets – nothing fancy. And it had to be wall mounted (you can’t see in the pics but there’s no pedestal) because I like to see the raw plumbing underneath. I like the mix of raw and pretty. I went with dark grey grout to make the penny tile and subway tile pop. Both tiles were cheap, cheap. The wood cabinet above the toilet was given to me and I left it raw and added a curtain. It sat in my driveway for ages – one day it fell over and the glass broke, otherwise I would have put some cool window film on it perhaps. The bathroom is very small and is between both bedrooms so we lose two walls to doors. I looked for months for a mini clawfoot tub and finally found one on craigslist. It had to be 4′ to fit along the wall where the shower had been. Most common size is 5′. Anything longer than 4′ would have meant moving the toilet/plumbing which = more $$$. This tub is adorable, but admittedly a bit tiny for grown ups! My kids fit in it perfectly. The only missing piece of the puzzle is the shower curtain rod.  I have to install a round or oval one and they’re flippin’ expensive! At our house things usually get about 95% done. There’s always that last bit that takes a while to finish. Anyway, after five years without a tub it’s all about long, steamy baths right now.

Lastly here are a few pictures taken later by Bethany Nauert for Apartment Therapy when a bit of our real life mess had seeped back in: 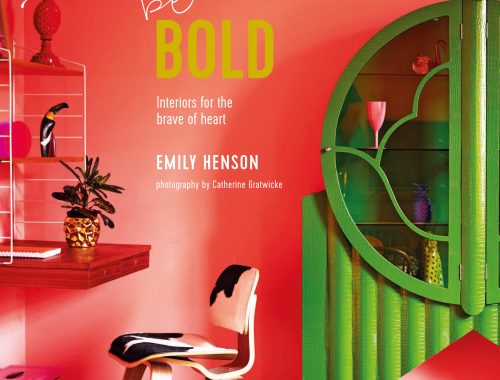 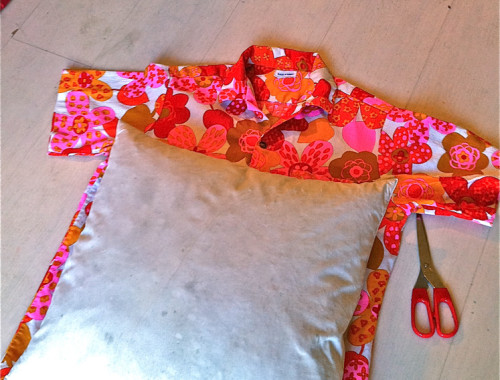